Check out our £10 specials GRAB A BARGAIN NOW !
+44 7814 390461 info@remixd.co.uk
FREE SHIPPING on order above £75
Follow Us:
Close Menu
No Hassle 14 day return on everything!
sign up to remix points for exlusive offers and discounts.
12 month warranty on wetsuits

Polarised lenses do what no other lens or lens treatment can - block blinding glare.

We’ve all experienced glare in our daily lives… perhaps spending the day at the beach, driving in a car with the sun reflecting off the dashboard, roadway or bonnet or on a boat with the sun illuminating the surface of the water,

Usually, this glare is annoying and uncomfortable on the eyes, but when the angle of reflection is just right, the glare can become blinding and often downright dangerous, as in the case of driving a vehicle.

Ordinary tinted sunglass lenses only cut down on ambient light that reaches the eye, or, light transmittance. By their very nature, they cannot block glare. Only polarised lenses can block out this dangerous, blinding glare.

When light bounces off of a surface, its light waves travel in all directions: some light travels in horizontal waves, while others travel in vertical waves. When light hits a surface, typically light waves are absorbed and/or reflected in a random manner. However, if light hits a reflective surface (such as water, snow, even cars or buildings) at just the right angle, some of the light becomes "polarized" or 'polarization'. This means that vertical light waves are absorbed while horizontal light waves bounce off the surface, this light can become polarized, resulting in glare that can interfere with your vision by striking the viewer's eyes intensely. Only polarized lenses can remove this glare.

What is a Polarised Lens?

Polarised lenses are laminated with tiny vertical stripes that only allow vertically angled light to enter the wearer's eyes. Glare is eliminated because the horizontal light waves cannot bypass the vertical filter.

Sunglasses and camera lenses are often polarised to reduce glare from surfaces, such as light reflecting off a lake or the bonnet of a car.

How Do Polarised Lenses Work?

When light bounces off of a surface, its waves tend to be strongest usually horizontally, vertically, or diagonally. This is called polarization.

Polarised lenses contain millions of parallel rows of tiny iodine crystals or dichroic dyes (so small they can’t be seen with the naked eye).

Like venetian blinds, the horizontal rows of iodine crystals contained within the polarised lens block out horizontal polarized light waves, letting only (non-polarised) vertical light waves reach the eye polarisation blocks as much as 50% of the light passing through a lens. The person looking through the lens can still see clearly in most cases, but it reduces the brightness and glare of light.

This results in comfortable vision with no glare, and is the reason why only a polarised lens can block glare. 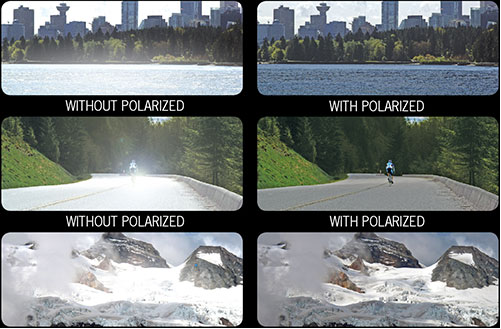 Lenses can be polarised to different degrees and in different ways. Most inexpensive polarised sunglasses have a thin film applied on one side of the lens. Many higher quality lenses have film laminated between two layers of lens material, preventing it from being scratched or rubbed off. In addition, the more dense the film is, the more polarisation it provides.

In most cases, polarised sunglasses don't look any different from regular sunglasses. While denser films tend to be darker, the colour of a lens does not determine how much polarization it provides. A very dark pair of sunglasses with a light film will not block more glare than a lighter shade of glasses with a denser film. The colour of the lens is also variable; although they cannot be made clear, polarised lenses can be made in gray, brown, green, or other colours.

Drivers, fisherman, and photographers were some of the first to use polarized lenses.

Because the polarising stripes reduce the amount of light entering the eye, these lenses should not be used at night or in other situations where clear lenses are required. It is not possible to make such lenses truly clear; even those with low levels of polarisation have a slightly gray hue.

Pilots should not use polarised glasses because they can make flight instruments difficult to read and other objects in the sky — including other airplanes — less visible.

Ultraviolet radiation (UV) comes naturally from the sun. There are also some manmade lamps and tools (welding tools, for instance) that can produce UV radiation. For most of us, however, the sun is the primary source of UV.

SO!  When choosing your lenses - all glasses offered by remixd are 100% Uv400 protected so rest assured your eyes will be safe. For crystal clear vision and glare reduction - choose polarised lenses.  For simple sunglasses for fashion - just choose the nicest pair and used the face shape guide!